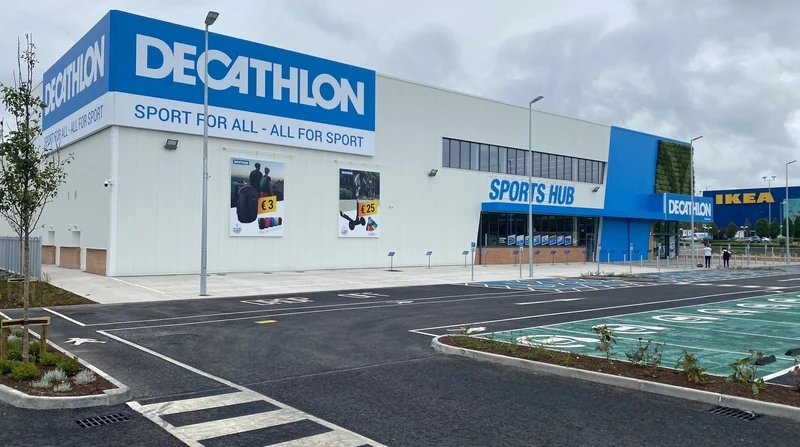 The Irish business of sports retail giant Decathlon has plans to open two more stores in Ireland “and expand in Limerick, Cork or Galway as a priority in the coming years”, according to a directors’ report in new accounts which show that Irish revenues at Decathlon Sports Ireland Ltd declined by 7% from €17.8 million to €16.58 million last year.

The retailer opened its first Irish store at Ballymun, Dublin in June of last year after a €13 million investment as the country emerged from the first Covid-19 lockdown.

In May of this year, the store was boasting the highest sales of surf boards in the world of any of the French-owned Decathlon’s 1,750 stores.

The CEO of Decathlon Ireland, Bastien Grandgeorge said that the Ballymun store opening performance “was Decathlon’s best ever new country opening” in terms of sales and visitors to a new store.

He said that the store is one of the best performing in the group over a 12 month trend.

Mr Grandgeorge said that in order to accompany Decathlon’s growth in Ireland, the firm is currently actively recruiting for more than 40 posts, including 20 positions for managerial roles in retail and finance.

“The online activity has been also boosted by the change of habits of purchase from sporty people during the pandemic and is growing multiple digit,” Mr Grandgeorge said.

“That confirms the great potential of this country in the sport practice, and so our will to continue to invest massively to develop our local presence, for stores and online,” he added.

According to the directors’ report attached to the accounts, despite the economic impact of the pandemic, Decathlon Ireland “has seen its market share grow in the Republic of Ireland as a result of the success of the online activity”.

Decathlon launched its online sales here in 2015 and the directors said that the success of online “has helped to establish confidence in relation to the success of this group in this country, when restrictions are lifted”.

The directors said that as a consequence of the Covid-19 impact, revenues declined by 7%.

The report states that “facing the crisis, the company engaged in actions to control the level of margin of its activity and also reduce its cost base”.

The directors said that as a result, the level of profit increased as a result.

Since June 2018, Decathlon Ireland Sports Ltd also acts as the supply centre for its European activities.

The directors said that with the Covid-19 restrictions in place since last December, Decathlon’s Irish store has only been partially open for essential goods.

They said that this resulted in five months of effective closure this year while stores in Europe have also been hit by closures.